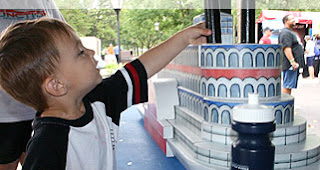 Join us Saturday, May 21 for a day full of fun!
Events will be going on all day, from 10 a.m. to 2 p.m.
at Audubon Mill Park on the Henderson riverfront
Tour the deck of a barge
View a towboat from Ohio Valley Marine Service up close
Experiment with a Working Lock and Dam
Work Giant 3D Puzzles by Riverworks Discovery
Meet a red-tailed hawk and owl from the Western Kentucky Raptor Center
Learn about River Safety from the Evansville Bend Power Squadron
Let storyteller Susan Fowler teach you about the river's history, culture and commerce
Sponsored by Ohio Valley Marine Service and The Depot Community Room
at 10:38 AM No comments:

History remembers Anna Jarvis, a Philadelphia woman, as the founder of Mother's Day. But while Jarvis' contribution to the observance of Mother's Day as a national holiday is great, she is hardly the originator of the idea.
That distinction is held by a Henderson, Ky., teacher named Mary Towles Sasseen. Sasseen was keenly devoted to her mother, and encouraged her students to celebrate the love and life of their own mothers. In 1887 she held her first public Mother's Day Celebration at the Center Street School where she taught. She championed throughout the Commonwealth for a day of honor for mothers, and in 1893 she published a booklet defining an annual "Mother's Day Celebration" on April 20. In the booklet she also suggested readings and activities suitable for its celebration. Newspaper accounts say that in 1899 she organized Mother's Day Celebrations at schools in Boston, Brooklyn and Little Rock. In 1894  schools in Springfield, Ohio, began observing the holiday. The Kentucky General Assembly recognized Sasseen as the originator of the idea for Mother's Day in 1926.

"The home being the center of all civilization, the mother is the star around which all civilization revolves," she wrote. "Home! That name touches every fiber of the soul. Nothing but death can break its spell and dearer than home is the mother who presides over it."

Copies of Saseen's booklet have been reprinted by the Henderson County Historical and Genealogical Society and are available for purchase at the Depot Community Room, which is open from 10 a.m. to 4 p.m. Monday through Friday and 10 a.m. to 2 p.m. on Saturday They are also available at the adjacent Historical Society, which is open from 10 a.m. to 4 p.m. on Tuesdays and Thursdays.
at 11:44 AM No comments:

This blog is maintained by the Henderson Depot Community Room, which strives to create an awareness of Henderson, Ky., history and culture through exhibits, events and community collaborations.